In the early 1860s, four young painters—Claude Monet, Pierre-Auguste Renoir, Alfred Sisley, and Frédéric Bazille - jointly turned their backs on the Academie. They would choose their own subjects and work in their own way. At the same time, many European artists were starting to paint en plein air—not just sketch in the country, but paint. The idea was to put what one sees on canvas immediately, so as not to lose the action and emotions of the moment. This meant painting at speed, using quick, short brushstrokes. It meant more light, more shadow, and overall visual effect rather than detail and contour. At this time, brilliant synthetic paints had become available; the artists of this new movement took advantage of pure, unmixed colour and created paintings that vibrated with energy. As the movement gained steam, one artist emerged as its master. And one of his paintings gave this new style its name: Impression, Soleil Levant by Claude Monet. 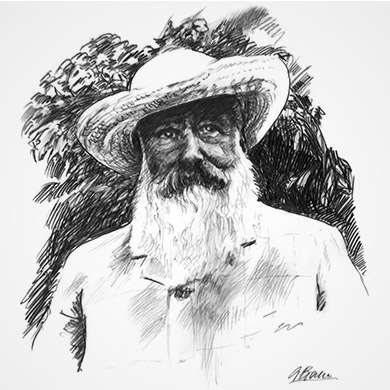 As a homage to Monet FREYWILLE´s artists want to remind us all of him through stylizations of his works in Art Nouveau and have interpreted the typical flowers of Giverny. Bloomy green and soft blue tones are predominant in the set IRIS, which is available either in mountings plated with 24kt yellow gold or white Rhodium/palladium. 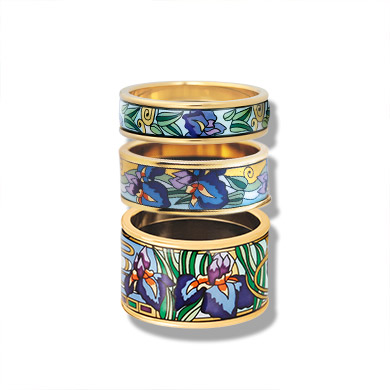 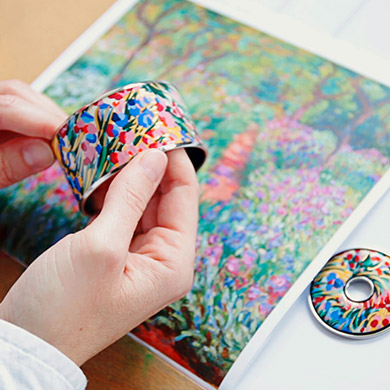 As a blooming oasis, the garden at Giverny became a refuge for Monet, a place where his mind could rest and inspiration could take over. Besides iris, lilies, wisteria and water lilies in abundance, the peaceful lake and Japanese-style bridge contributed to the idyllic scenery. With his Giverny-inspired paintings, Monet was able to transfer his stunning surroundings and his personal sentiments for this lieu onto canvas. In the FREYWILLE design GIVERNY, all elements fluidly align: flora, raw nature, light and abstract colours for which Monet is most famous. With love for detail, the FREYWILLE artists have captured the impressionistic brushstrokes, and reflections dancing elegantly on the grass and blossoms.

The impressive installation of Les Nymphéas in the Musée de l’Orangerie in Paris sprawls over two oval rooms of straight architecture. The interiors are minimalist, and peace is palpable. This environment is the perfect frame for the overwhelming Water Lily paintings, which expand a length of over 300 feet.

A place of rest and reflection – the atmosphere is much like the environment Claude Monet created in his garden in Giverny. FREYWILLE’s design, ORANGERIE, is about the atmosphere’s influence on personal reflection, thought and various moods. The imposing motif of the Water Lilies brings forth the feelings and sensations of Giverny with its fragrant flowers, warming rays of sunlight and gentle wind of Normandy. Together with shimmering light on the blossoms and waves – representing the sunset – Orangerie suggests a perfect allegory of idyll. 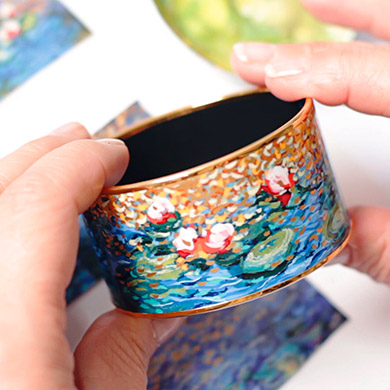 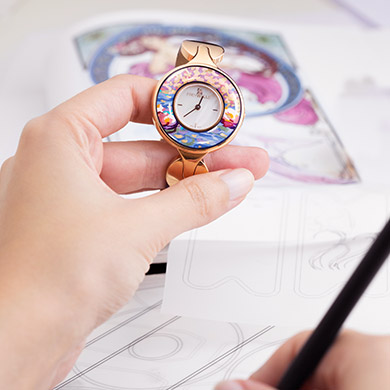 
Tender shades of rose and blue form a harmonised composition, reflecting a sunset mood of the Water Lilies of Giverny. The creation beautifully emphasizes the flair of the Normandy, the fading ray of sunlight and the gentle colours of dawn.
The silky shimmering rose gold combined with the artistic handcrafted fire enamel unfolds its tenderness and contributes to the romantic mood of this new Hommage collection.

Monet's most significant works, the water lily paintings, served as inspiration for the design of ORANGERIE. In an incomparable way, ORANGERIE reflects the atmosphere of Giverny, the scent of flowers, the warmth of the sun and the gentle breeze of Normandy. Combining 18kt gold, radiant diamonds and the artistic fire enamel in the design of "Orangerie", the jewellery present themselves in their most luxurious manner for everlasting joy. 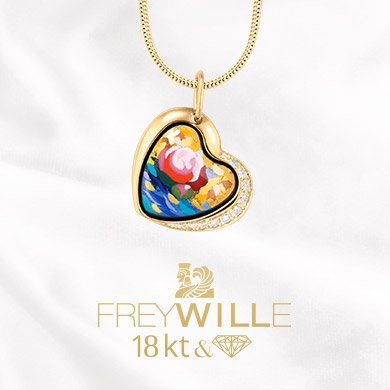