In the latter half of the 19th century, the Industrial Revolution caused the accelerated development of technology, productivity and sciences. As people flooded out of the countryside and into the cities, entire villages disappeared and millions of city dwellers found themselves living and working in miserable conditions. At the other end of the social scale, people lived in cluttered, overly-decorated homes. Anything and everything could be produced, quickly, cheaply and in large quantity. Life moved quickly, beauty was cheap, people were unhappy. Society, they said, had no soul.

The solution, for some, was a return to spirituality. Not in the religious sense, necessarily, but through a simpler way of living—one that was less complicated and more in tune with nature. For artists, this meant looking back at the old ways of doing things, and looking for inspiration in nature and natural forms. Artists were weary of the formal, stifling strictures of Academic Art; at the same time, influences were seeping into Europe from exotic lands like Japan, India and Africa

It was out of these combined circumstances that the Art Nouveau movement was born. It was, in fact, a counter-movement encompassing all forms of art - one marked by playful motifs, lush colours and dynamic, undulating lines. Natural forms became decoration and the style came to adorn everything from architecture to fashion to advertising. It spread throughout the world, although under different names - Jugendstil in German-speaking countries, Art Nouveau in France, Modern Style in England, Modernisme in Spain, Stile Liberty in Italy. Regardless of what it was called though, the influence of the Art Nouveau movement was profound, and permanent. 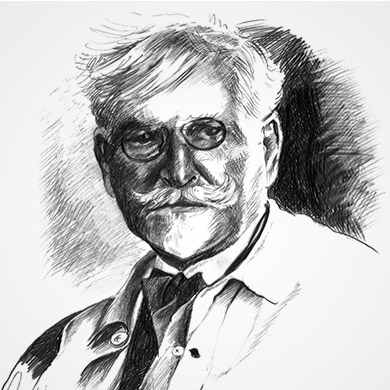 Alfons Maria Mucha was born in 1860, in Moravia (now the Czech Republic). In childhood, drawing was his hobby; he was a self-taught artist and spent the beginning of his career as a scenery painter. In 1887, after studying at the Academy of Arts in Munich, Mucha moved to Paris, and continued his studies at the Académie Julian and Académie Colarossito, all the while working as an illustrator for the advertising industry.

In 1894, Mucha learned that a local print shop had an urgent need for an advertising poster for the play Gismonda, featuring Sarah Bernhardt, who was the most famous actress in Paris. He volunteered, the poster was a huge hit and, within a short period of time, Mucha became the most successful graphic designer and illustrator of his generation. He enjoyed enormous acclaim; in 1901, he was named Chevalier Légion d'Honneur.

In 1904, Mucha moved to the United States, where he taught at various universities. In 1910, he returned to Prague and focused on painting what he considered to be his masterpiece, The Slav Epic. As an artist, however, he was one of the first to be arrested when Germany invaded his country in 1939; he died that year, shortly after his release.

The work of Alphonse Mucha, in his uniquely decorative and symbolic style, shows a world of ethereal beauty in which art and life are harmonically balanced. This was the inspiration for the FREYWILLE artists to create the collection Hommage à Alphonse Mucha; typical Art Nouveau elements combined with individual notes from their own interpretation. In two colour versions of the Sarah Bernhardt designs—burgundy and aquamarine—we see gently swirling lines, golden spirals and magical shapes come together to create an intimate, emotional connection with those who gaze upon it.

The Art Nouveau movement comes alive for all those who wear these gorgeous pieces. 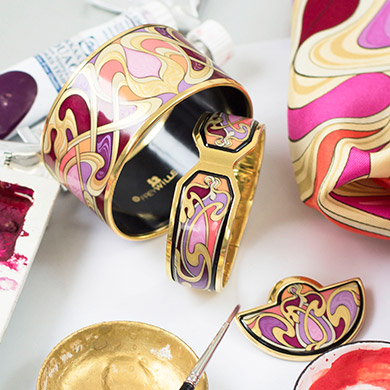 Capturing a fleeting moment of fragile beauty in shimmering fire-enamel, the design PAPILLON impresses with a striking palette of turquoise, blue and violet, highlighted against its jade and midnight blue background. Reminiscing the shades and shimmer of the sea, the design embodies a curious ambiguity: fragile and gentle like a butterfly’s wing and at the same time expressive, bold and present.

Inspired by PANTONE's Colour of the Year 2018 - ultra violet - FREYWILLE has created a striking colour version of this design: PAPILLON METAMORPHOSE captures a fleeting moment of fragile beauty in shades of intense violet, set in shimmering rose gold fire-enamel.

For the development of this collection, FREYWILLE playfully hints to Alphonse Mucha’s frequent use of peacock feathers as well as his decorative, circular headpieces seen in many of his illustrations and paintings.

The combination of these soft and curvy elements inspired FREYWILLE to create its very first rose gold collection to enhance and underline the feminine aspects of the design. Modern and timeless, these rose golden pieces create a perfect frame for the interpretation of Mucha’s characteristic formal language.

The rose gold theme was furthermore repeated within the enamel itself – a company debut as well – by luxuriously implementing 24kt rose gold enamel to create a perfectly harmonized composition. 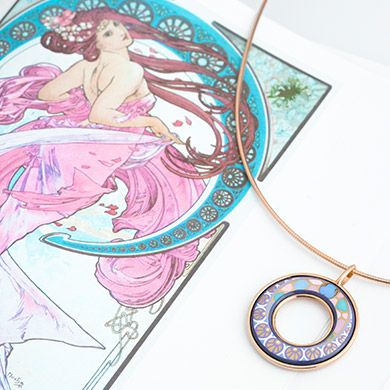