Vincent van Gogh (1853 – 1890) has been on the mind of FREYWILLE artists for many years – and now, after a period of intense research and design work, FREYWILLE finally reveals a new Hommage dedicated to one of the greatest artists of all times . Three of Van Gogh’s masterpieces have been chosen as an inspiration to create beautiful jewellery: “Almond Blossom”, “The Starry Night”, and “Sunflowers”. Many thoughts and dedication were given to this new collection, which is certainly a significant milestone in FREYWILLE’s creative work. 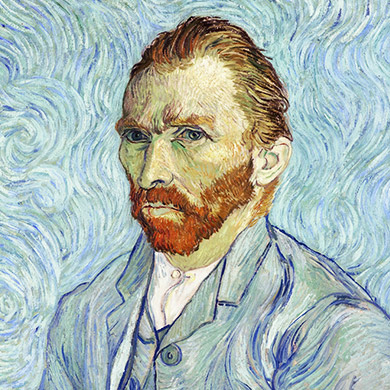 Vincent van Gogh (1853 - 1890) is considered to be the founder of modern painting. His paintings are associated with Post-Impressionism and have had a major impact on subsequent art movements, such as the Fauves (including Henri Matisse) and the expressionists.

His painting technique is unique and recognizable as such at first glance. Van Gogh painted quickly and spontaneously, without major corrections. Strong colours and thick brushstrokes expressed what he could not say in words.

He applied the colours impasto, i.e. undiluted or only slightly diluted, and sometimes pressed them directly from the tube onto the canvas. Using this technique, his expressive brushstrokes became vividly visible and contributed to his incomparable style.

While he was barely able to sell pictures during his lifetime, his works today achieve record prices at auctions.

Just as Van Gogh's paintings were influenced by other painters, FREYWILLE’s artists got inspiration from his works to create this beautiful jewellery collection: 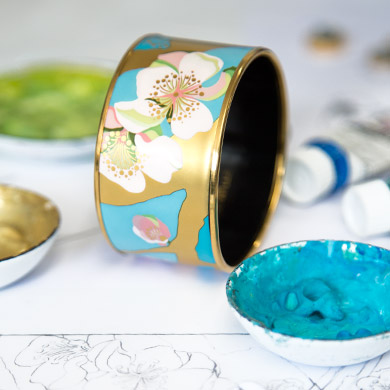 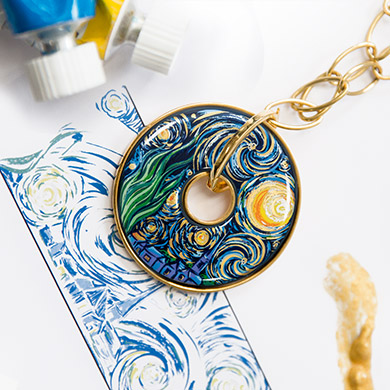 “The Starry Night”, one of Van Gogh’s most highly regarded paintings, depicts the view from his room just before sunrise, with the inclusion of an idealised village. With great care and humbleness the FREYWILLE’s artistic team interpreted the original design and translated it onto precious fire enamel.

Van Gogh created numerous versions with the sunflower motif. The set by FREYWILLE is a symbiosis of these images. However, the main inspiration was taken from Vincent van Gogh's most famous works of art in a series of paintings from 1887 - 'Twelve Sunflowers in a Vase'.

Finest 24-carat gold powder was melted in the fire enamel motives of all designs of the Hommage à Vincent van Gogh collection. It can be found in the almond blossoms and branches, the highlights of the sunflowers, as well as in the striking vortex of the night sky. 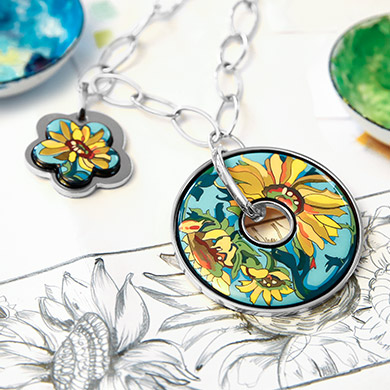 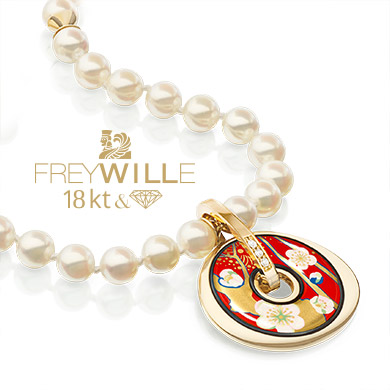 The interpretation of various paintings of Van Gogh led to the creation of a beautiful jewellery collection, which finds in our Fine Jewellery the highest perfection of enamel jewellery art.