Inspired by past epoches Gustav Klimt created portraits of beautiful decorations and symbolism never seen before. At the end of the 19th century he developed a completely new way of painting that united natural details with abstract, colourful and tessellated patterns 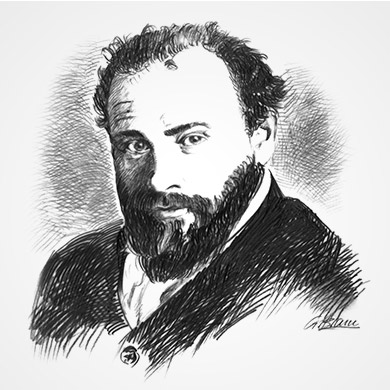 Klimt became known for his paintings, murals and beautiful objets d'art. If his style was unusual, his subject matter also raised eyebrows - Klimt saw nothing wrong in depicting sexuality and the female body became his primary subject. He also became known for using golf leaf, a practice he fully developed after being inspired during a trip to Italy. By 1909, he had received enormous recognition for ceiling frescos and wall paintings in Vienna’s Burgtheater, in the city’s Kunsthistorisches Museum and the University of Vienna. In 1910, the Venice Biennale purchased his painted ‘Judith II’ or ‘Salome’, and his international reputation was set.

In the early 1890s Klimt met the fashion designer Emilie Louise Flöge. Whether or not they were lovers is debatable. Klimt fathered at least 14 children — none with Emilie, yet she remained his companion for the rest of his life. She was the model for many of his figures and his masterpiece ‘The Kiss’ is thought to be the image of them together, real or imagined. When Klimt was finally felled by a stroke, in 1918, his last words were ‘Get Emilie’.

Lush images, wonderful colours and lots of gold — with all of this, FREYWILLE’s artists did not have difficulty finding inspiration for their Hommage a Gustav Klimt designs.

Their design Inspired by the Portrait of Adele Bloch-Bauer shows the typical decorative elements and playful shapes favoured by Klimt. 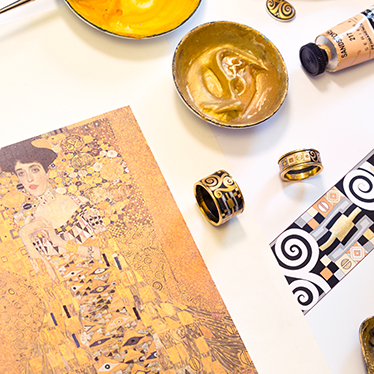 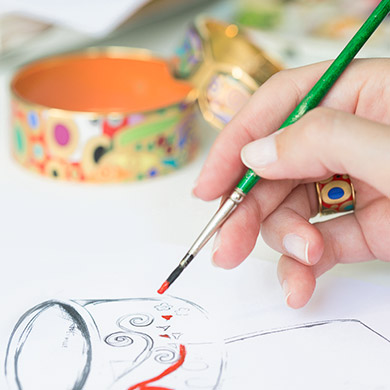 And his famous painting ‘Hoffnung II’ (Hope II) served as inspiration for the FREYWILLE design of the same name — a stunning creation which combines bright colours, swirling shapes and fascinating gold.

The elegant FREYWILLE design Nixe is dedicated to the painting Wasserschlangen I (Watersnakes I) which shows two dreamy nymphs. Here, gold surrounds islands of colour in a high-shine finish; spirals in subtle colours and bright gold rise like tendrils. FREYWILLE's artist took this image a little further with Nixe Aqua, in which they depicated this fantastic design using light blues, turquoise and violet. The result is magnificent. 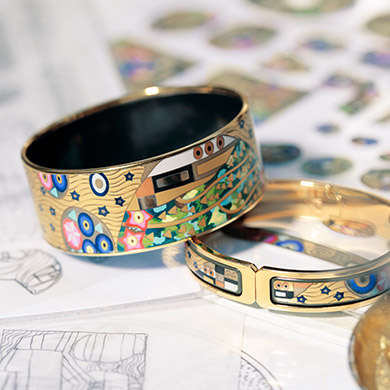 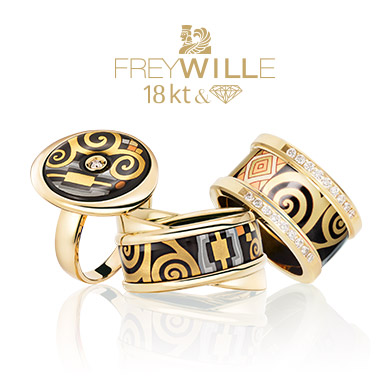 The FREYWILLE artist team was inspired by Klimt's paintings and his unmistakable style, by his muses and especially by the way the artist portrayed them. This inspiration was realized in the design "Inspired by portrait Adele Bloch-Bauer" with the, for Klimt characteristic, decorative elements and playful forms.
The precious fire enamel of this design is now combined in the most luxurious FREYWILLE jewellery line, with settings in 18kt gold and exquisite diamonds, which guarantee the highest quality and everlasting joy to the exclusive pieces.